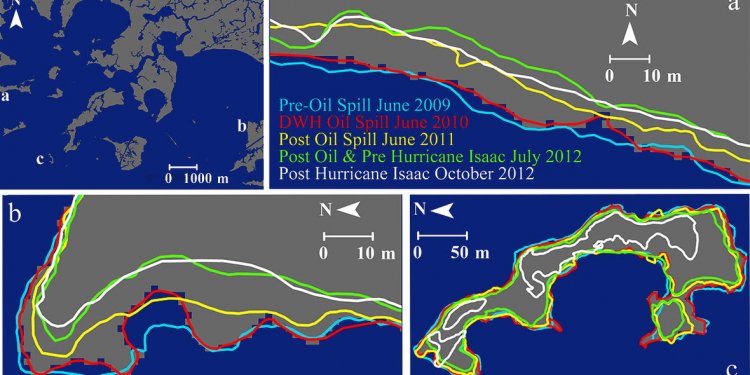 
"Sea snot"—sticky clumps of phytoplankton—permeates an undersea patch of the Gulf of Mexico in May.

The boom likely precipitated a sea-snot "blizzard" in Gulf (map) waters, researchers say. And as the clumps sank, they may have temporarily wiped out the base of the food chain in the spill region by scouring all small life from the water column.

These particularly slimy flakes of "marine snow" are made up of tiny dead and living organic matter, according to Uta Passow, a biological oceanographer at the University of California, Santa Barbara.

Tiny plants in the ocean called phytoplankton produce a mucus-like substance when stressed, and it's possible that exposure to the Deepwater Horizon oil caused them to pump out more of the sticky stuff than usual.

This abundance of "mucus" made the naturally occurring marine-snow particles—usually about a few millimeters wide—even stickier.

"Everything they collide with in their path they collect and take with them, " said project leader Passow, who's currently tracking marine snow aboard the research vessel

(Related: why the Gulf oil spill isn't going away.)

Based on surface observations and oily layers of dead plankton found on the seafloor, the researchers believe the sticky particles may have plummeted to the bottom of the ocean in a marine-snow "blizzard" around the Deepwater Horizon site in May. Passow cautioned, though, that no one actually witnessed the snowstorm.

In the lab Passow and colleagues are working to reproduce the marine-snow conditions that might have spawned the "huge, slimy" event, she said.

One simulation found that month-old marine snow would have sunk to the seafloor relatively fast—sinking hundreds of yards a day, compared with an average marine-snow sinking rate of 115 feet (35 meters) a day.

It's unknown why the material would have sunk so fast, Passow said. But it's possible the oil killed so many of the ocean's tiny floating organisms that the snow became abnormally heavy and so fell quicker than usual.

That heft may also explain why Passow and colleagues are finding so much new sea snot in the seafloor traps that they check every 36 hours—though nothing approaching the levels collected during the May snowstorm.

Recent observations by the team—including Vernon Asper and Arne Diercks of the University of Southern Mississippi—show no evidence of unusually voluminous sea snot at the surface nearly five months later, Passow noted.

The sea snot explosion, it seems, has come and gone, though its effects may linger. The sea snot blizzard "probably will have a long-term impact, " Passow said—though exactly how the blizzard will affect the Gulf is anyone's guess.

(Read about the Gulf oil spill in the October National Geographic magazine.)

The possible long-term impact of the blizzard stems in part from its potential to starve or poison marine creatures.

By sinking en masse, the marine snow may have deprived fish larvae of a crucial food source—the phytoplankton itself. When fish larvae hatch, they have less than a day to find sustenance or they'll starve, Passow noted. (See pictures of ten animals at risk from the Gulf oil spill.)

On the Gulf seafloor, the sticky "snowstorm" may have killed bottom dwellers.

In addition to being perhaps suffocatingly large, the blizzard may have been toxic. Scientists have found tiny black dots in sediment traps near the BP spill site that—if confirmed as oil from the Gulf spill—suggest tarballs got swept up in the snowstorm.

Normally, dead organisms settling on the seafloor are free meal deliveries for animals living at depth. "But when it's oil-soaked particles, I suspect the bottom-dwelling organisms might not be so happy, " marine-snow expert Alice Alldredge said.