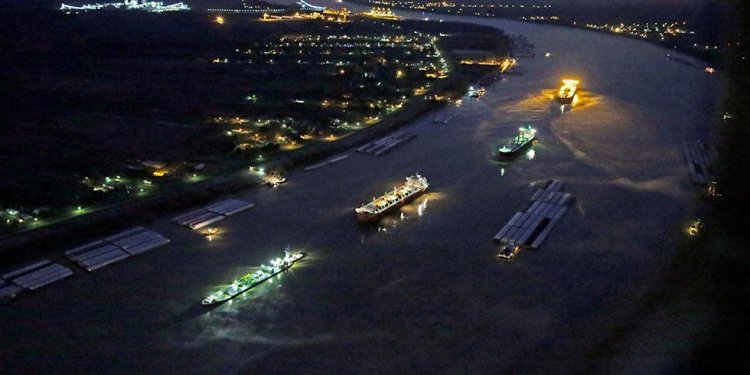 Much of 5, 300 gallons of oil spilled Monday (Sept. 5) when an excavating marsh buggy cut through a pipeline in southern Barataria Bay has apparently ended up on Chenier Ronquille, a barrier island that is being restored with $36 million paid by BP to restore natural resources damaged by the company's 2010 Deepwater Horizon oil spill, according to photos released by an environmental group on Friday.

Aerial photos taken Thursday by Jonathan Henderson of the Vanishing Earth environmental group, flying with a SouthWings.org pilot, show dozens of workers using boom material to try to corral liquid oil in several locations along and on the barrier island. The photos also show workers attempting to wash down oil that is already on marsh grass on the island.

SouthWings has been providing flights to private individuals documenting oil spills in Louisiana coastal waters and the Gulf of Mexico for a number of years, including during and after the BP oil spill.

On Friday, the U.S. Coast Guard issued a press release from the "unified command" of federal and state agencies and the "responsible parties" for the spill that did not mention that oil was on the island. News releases issued Monday through Thursday also did not mention the extent of the spill's effects, other than to say that 200 birds were oiled.

Friday's news release did say that there are now 170 workers, 33 boats, 9 skimmers and more than 12, 000 feet of hard-boom that have been deployed "to contain and recover the product."

"Response crews are working to safely capture the oiled wildlife for rehabilitation, " the release said. "To date, 4 birds and 1 herptile have been captured." The Coast Guard and the unified command did not initially respond to a request to explain what the herptile was - the word includes both reptiles and amphibians, and thus could be an endangered Kemp's ridley sea turtle, or an alligator, or some other animal.

Late Friday, after being told that photos of the oil on the island had been made available to NOLA.com | The Times-Picayune, unified command officials released some additional information about the spill, including confirming that the herptile was a Kemp's ridley turtle "that showed no signs of external oiling."

The Coast Guard, unified command and the state Department of Wildlife and Fisheries also did not respond to repeated requests for photographs of the spill and the cleanup, except for one photo released Thursday evening that did not show the extent of oiling on the island. Late Friday, the state Department of Wildlife & Fisheries released a photo of an oiled clapper rail that was captured for rehabilitation.

Members of the public seeing oiled birds are being asked to call Wildlife Response Services LLC, of Seabrook, Texas, at 713.705.5897. In the late Friday response, officials said a wildlife rehabilitation center has been set up at the Louisiana Department of Wildlife & Fisheries' Grand Isle Marine Lab, with Rhonda Murgatroyd, owner of Wildlife Response Services, listed as the wildlife rehabilitator. The Grand Isle lab will not be open to the public or the media to minimize stress on oiled wildlife, officials said.

Officials also said that there are "at this time, no oiled dolphins observed with visible external oiling."

The release of oil occurred when a contractor operating the buggy for Great Lakes Dredge & Dock Co. accidentally cut through a pipeline on the edge of Bay Long owned by Harvest Pipeline Co., an affiliate of Houston-based Hilcorp Energy.

Great Lakes is overseeing reconstruction of the barrier island under a contract with the National Oceanic and Atmospheric Administration, one of six federal and five state trustees overseeing the Natural Resource Damage Assessment process for the BP spill.

The $36 million was part of $1 billion that BP set aside a year after the 2010 spill for restoration. Since then, the company has agreed to pay another $7.1 billion for natural resource damages as part of a 2015 settlement with the federal government and the states.

Of that, $5 billion will be spent on restoration project in Louisiana, including the Chenier Ronquille project.

The Chenier Ronquille project was first authorized in 2010 as project under the federal-state Coastal Wetlands Planning, Protection and Restoration Act, as part of a federal-state plan to rebuild all the barrier islands at the southern end of Barataria Bay. The island work was to include repairing breaches in the shoreline caused by hurricanes and other storms and the recreation of dunes along its Gulf beach and the creation of new marshland along its bayside edges.

Thursday's photos show oil has made its way into depressions that may have been part of the restoration effort.

According to a 2013 environmental assessment prepared for the project, the island could be used by a variety of migratory bird species that call Louisiana's barrier shoreline home, including herons, egrets, night-herons, ibis, roseate spoonbills, anhingas, and cormorants, as well as 14 species of ducks and geese.

The environmental assessment warned that oil and natural gas activity are found throughout the coastal area, including on and around the island.