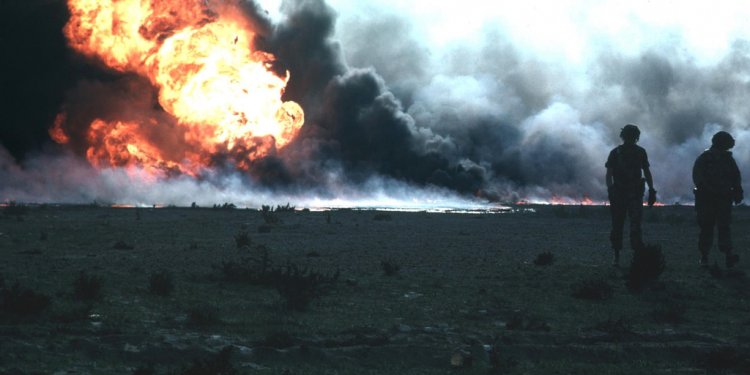 
Like Iraqi troops withdrew from Kuwait after initial Gulf War, they set fire to over 650 oil wells and damaged many others, just south regarding the Iraq border (yellow line). These Landsat photos show before, during and after the production of 1.5 billion drums of oil to the environment, the greatest oil spill in human history. (Credit: NASA's Goddard Space Flight Center)
› Larger picture


In 1991, Landsat grabbed the devastating environmental consequences of war. As Iraqi causes withdrew from Kuwait, they set fire to over 650 oil wells and destroyed nearly 75 even more, which then spewed crude oil throughout the wilderness and to the Persian Gulf.

Fires burned for ten months. Based on a 2009 study posted in tragedy protection and control, firefighting crews from ten nations, part of an answer group that comprised more or less 11, 450 employees from 38 nations, used familiar also never-before-tested technologies to put out of the fires. Once the last one had been extinguished in November, about 300 ponds of oil remained, plus a layer of soot and oil that fell out of the sky and blended with sand and gravel to create 'tarcrete' across 5 per cent of Kuwait's landscape.

Crisis responders and boffins in Kuwait used Landsat also satellite data to locate and monitor the plumes of smoke and burning wells. The three images above from Landsat 5's Thermal Mapper tv show Kuwait in August 1990 before the fires, June 1991 although the fires had been burning, and January 1992, 2 months following the last fires were put out. Within 3-band composite (7-4-2), Landsat-5’s shortwave infrared band (musical organization 7) effortlessly detected the flames burning up at over 1300°F (700-800°C). The fires had been therefore hot that the detectors overloaded temporarily, switching the saturated purple dots into saturated lines visible in the June 1991 image.

Subsequent studies made use of Landsat to consider the before and after results of the fires and to monitor the changes into the oil ponds within the last 22 many years. The ponds tend to be visible into the 1992 image all over section of the former fires.

NASA and also the U.S. division of the Indoor through U.S. Geological study (USGS) jointly manage Landsat, as well as the USGS preserves a 40-year archive of Landsat images that's freely readily available online. Next Landsat satellite, now-known because the Landsat Data Continuity Mission (LDCM) and later is known as Landsat 8, is scheduled for launch in 2013.